and 19th of July 2013
in festival notafe, Viljandi 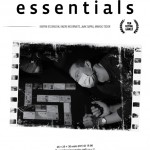